The new version of the Roll20 character sheet is up, I pushed the code to github and thought it might take a couple weeks but they pushed it right away and so I haven't had a lot of time to write up a good blog post on the subject.  My idea to publish something on the Beacon Blog weekly is not going to happen and although I am hoping to meet a monthly schedule, honestly I'm pretty happy with the pace of the playtesting and the recent changes to the sheet.  No reason to complain about that. 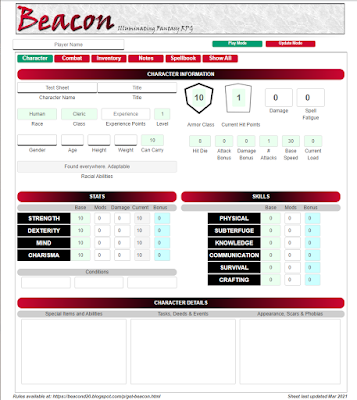 The new sheet has a bunch of changes.  It looks prettier with a less crowded layout and more colour.  I incorporated the Beacon logo colours into the page headers and the repeating list controls.  I cleaned up the fonts, added a new Notes tab and moved spellboox to the end of the sheet. I put in a minimum and maximum width for the sheet so it doesn't compress or expand and throw off the labeling.
I added in a lot more fields for notes. I found personally that one or two large text boxes on a roll20 sheet does not work like a paper sheet where you can write little notes everywhere.  Having more smaller boxes lets you organize better and keep smaller bits of info easier to read.  I also put in some boxes for tracking conditions like a sickness or if your character is encumbered.
Aside from those cosmetic type changes I fixed an issue where chainmail was not the right AC and where wearing heavy armour would remove dexterity penalties and not just dexterity bonuses.  I also fixed some of the weapon damage calculations and separated out attack bonuses and damage bonuses so you could model a spear that gives damage bonus but actually have an attack penalty.  This makes customizing weapons much more flexible.  I moved a lot of the weapons and armour detail into expandable sections that players can hide away most of the time, and I added note fields.  I also fixed the maximum range calculations on ranged weapons so they display now.  I also added in a repeating section for companions and henchmen where players can note many common attributes for a hired hand or their apprentice or animal companion.  I also rebranded/recalculated the coin totals to be in silver as well as companion wages.  Beacon is a Silver standard game so that fits better with the theme and reminds everyone to scale down appropriately.
The biggest change was adding encumbrance/inventory system.  The encumbrance system was hard to sort out because it has to be both simple and flexible but also contain a good amount of automation or it will never get used.  The last version of the sheet had a simple spot for players to keep track of their carried load and did the strength calculation for them.  This NEVER got used.  Players just won't use a system that requires even this level of manual bookkeeping and I get that.  Either its just not their thing or they do like to do it but get caught up in something else and then the tally gets messed up over time anyway.  I decided what I would try was to do as much as possible in the sheet, but not sweat the small stuff which resulted in a hybrid system where I automated as much as I could but added in namable 'container' items with a load value that would store all the odds and ends. 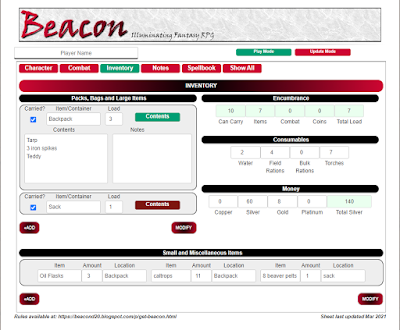 What that resulted in was four interworking systems to track encumbrance: consumables, combat, coins and item/containers. Encumbrance for weapons and armour is calculated from equipped types, as are the most common consumables like rations and torches, tracking coin weights was already implemented, and finally these large items/containers would manage everything else.  My view of this is that the more opt-in you automate the more likely the system will get used so having players just focused on keeping track of large items and packs and sacks in a little widget was the perfect level of interaction.  You can always ignore the whole encumbrance system but I'm finding more and more that it powers that exploration vibe I like.
The weapons and armour opt-in to the encumbrance system by default when you add the item row and you can uncheck them if you need to drop them.  Armour has different encumbrance if its work vs carried and the sheet can track that.  You can add as many items and containers as you like and they have both inventory and note text boxes as well as a checkbox if you decide to drop one somewhere.  The rows of small item trackers have a location field so you can list what container they are in etc.  All in all I think it adds a lot to the game having this in the sheet.
I'm pretty excited to see how this will work in game, it seems like the right handshake between automation and player participation in the system.  Its also a lot prettier than it was before.