Most of the writing I have done about other games I moved out to my other blog so that it didn't dilute this site, which is supposed to be about Beacon design commentary.  Now that I'm resolved to try to post something on here once a week, I thought it would be good to write about some of the games I've played in the last few years and what influence they've had.  Naturally there is a lot of overlap between what I'm playing and the game design process so I think since its relevant.  I'll try to bring it all back around to how it impacts that crisp hot Beacon brand in any case. 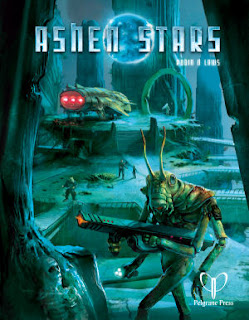 And I guess I should start with Ashen Stars.

Ashen Stars is a gumshoe based space police investigative game.  Players play Lasers who fly their space ship around the crumbling remains of a vast Federation solving crimes, kicking butts in a mostly non-lethal manner.  The game setting is one of the best I have come across, just the right amount of familiarity and the right amount of ambiguity to make good sci-fi stories happen.

I found space cops to be a really good game premise because the players have to follow procedures and maintain their reputations rather than just kicking in doors and shooting people.   Its great fun being able to parade a bad guy around and have him be untouchable because the players don't have the proof to take them down yet.  Players HATE this but it is really the best because they love hating stuff and it takes some time to nurture those relationships.
Also having mechanics that force players to own up to their actions is useful.  Having a reputation mechanic that offers the option for them to take the short cuts but at the risk of loosing future income is delicious.  There are so many good systems in Ashen Stars, the ship combat is simple but fun, the gumshoe investigation mechanics are good, it has the right level of abstraction for tracking items and money.

I did find that some of the mechanics seemed a bit stodgy when the players were resolving physical challenges.  The d6 mechanic does not leave a lot of room point spend systems are are not my favorite.  I am probably not really running gumshoe on all cylinders so my games tend to be too easy and players seem to always have enough points to buy success.  I have tried ramping up the  challenge but once a few ability pools are used up the players want to rest and recoup, this is the 10 minute adventuring day of gumshoe it would seem
But I get the idea that as you use up your resources the narrative gets more tense but in my experience players will be miserly with points and when they run out, they will start feeling the game is against them more than if they had merely failed a roll normally.

I also felt that the game was missing a level of play at the party level.  Ashen Stars has a ship sheet and there is the idea of the crew as a business entity with reputation and shared resources, but I found it wasn't enough to really draw the players together.  The first time I ran the game the players either didn't care about earning money or they didn't have anything to spend their money on and so there was no real fear of loosing their reputation and not finding good jobs or having longer down times between them.  There were some ship modules to buy but for some reason they didn't glom onto these like I expected, maybe they were not as relevant to their PCs regular actions.  Again this might reflect on my GM chops more than the game system itself.

When I next ran the game I tried to address some of these perceived issues by establishing a corporation for the party with a bank account and I gave them a large Traveller style mortgage on their ship.  I also added in some living expenses and a the concept of financial random encounters all in the effort to give the players something to hunger for and to make the reputation loss mechanics more meaningful.  If I were to run the game again I would incorporate these ideas into the game and pay way more attention for ways to compromise the crew reputation.

I don't want to give the opinion that Ashen Stars is not a great game as written, because it really is a fantastic and classic game.

Since Beacon is designed to be a Old school d20 system and have a high compatibility with other d20 systems there isn't a ton of mechanics that I would try to directly incorporate from Ashen Stars.  I considered adding in some kind of reputation mechanic and know this is done in other d20 games, but I don't think I would add it to the core rules, especially since Beacon is PC focused and not at all party focused mechanically.  I might someday consider some sort of party mechanics outside the core rules, maybe some kind of play supplement or campaign books.  So not much mechanically, however from a 'GM advice' perspective I would definitely take a lot from Ashen Stars, most importantly the gumshoe core concept of giving clues rather than asking for 'notice rolls' and having players get spotlights on collecting information appropriate to their skills and activities.  The Knowledge and Subterfuge skills stand out here but all the skills are easily applied to information gathering.  A player with a high Physical skill would notice an expert swordsman pretending to be a novice, a player with high Communication would naturally draw NPCs out in a conversation etc.

And this is longer than I thought it would be so I'll leave it there.  Would I play this game again - hell yes.  Here's my original thoughts on Ashen Stars from years ago if you are interested;
Part 1
Part 2
Part 3

Email ThisBlogThis!Share to TwitterShare to FacebookShare to Pinterest
Labels: influences, other stuff, review